Who pays for the wedding?

The question of paying for a wedding used to a simple affair: it was the responsibility of the bride’s father. End of story.

This tradition dates from a time when the view of girls was one of them being an economic encumbrance. Outside the working classes, girls were not allowed to work. Thus they were rendered an economic millstone around the necks of men. So, brides’ families had to pay off the groom’s family with a dowry to persuade them to take their daughters off their hands while making sure they were taken care of. It wasn’t a matter of love actually. And still isn’t in some cultures.

And then, as this article from Offbeat Bride points out, even when dowries went out of style the business of the trousseau remained. That being the wedding dress, the accoutrements for the wedding, plus the cake and a whole lot of other wedding elements. Perhaps you have heard your mum or gran talk about her ‘bottom draw’? Over time she would buy items such as linen, tableware etc. and put them away for when she had a home of her own.

But times have changed. Women are now much older when they marry. They also, as a rule, have economic independence. In the times when girls and women were chattel they had to marry when little more than children. For that reason, the dowry and trousseau were there to help the groom support his new wife and their ensuing children in their early years. These days though couples often co-habit before they marry so enter married life with a complete household. And so, the need for this outmoded tradition is negated.

It’s not only the place of women in society and their corresponding enhanced economic status that’s changed.

Marriages were once, for most people at least, pretty simple affairs.

The wedding breakfast often consisted of a ‘tea’. Common venues being a village hall or a function room above a pub. But it could just as easily have been in someone’s ‘front room’.

The front room was the location for many weddings in bygone eras.

But as Western society became a more capitalistic and materialistic one the possibilities and expectations of what a wedding can involve have increased manifold. As has what it all costs. 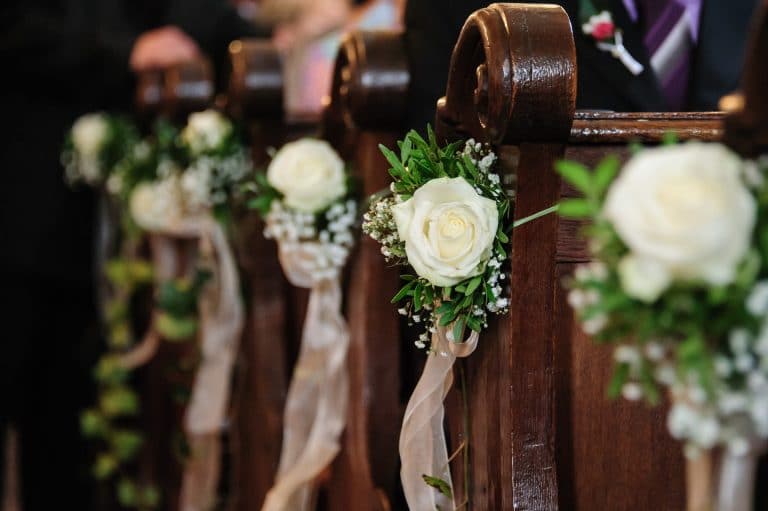 In recent years, these economic changes have had a knock-on effect on the way we do things. There are still circumstances where the bride’s father pays for everything but we now also see:

Get the guests to pay

Or – there’s asking guests to pay for themselves. ‘What!!’ I hear you cry. Are you serious? Well yes, we are. Or rather one couple from Derbyshire are.

Ben and Clare recently hit the headlines with their plan to charge their guests £150 each to attend their wedding.

Why? As it says in the article: ‘Before Ben, 37, proposed to his girlfriend, Clare, 37, he knew that she’d say that they couldn’t afford to get married should he proposed, so naturally he thought of a plan.’

Before this blog goes any further we feel honour bound to point out that there’s not any such thing as ‘can’t afford to get married’.

You might not be able to afford a country house hotel with all the bells and whistles but that’s the not the same thing at all as not being able to afford to marry. All of that stuff is wonderful and special, and we exist to help you achieve it! But it’s not fundamental. The only thing that’s crucial is a legal civil ceremony. Everything else is icing on the wedding cake.

Anyway, to return to this story. Before you’re overcome with outrage at what you could view as being tantamount to an entry fee to a wedding let’s take a step back, draw breath and consider a few things.

We spoke earlier of how sophisticated wedding proceedings have become. So too have hen and stag nights. These too have morphed from a plate of sandwiches in the pub or maybe a curry, to spa weekends for the girls and weekends in Bulgaria for the boys. We’re sure a good percentage of you out there can put your hands up to having to dig deep for something like that.

None of these weddings will be ‘free’ to you as a guest. You’ll get a meal yes. And there might be a free bar. Happy days. But you’ll have to factor in

Not forgetting of course your outfits and the wedding gift. Oh – and perhaps a babysitter too.

How much are you up to now do think?

A recent Vodafone advertisement, featuring Martin Freeman, lampoons the foreign wedding scenario (and its cost to the guest) in entertaining style:

That’s a lot of hidden costs to a wedding invitation. A whole lot more we’ll wager than what this particular couple are suggesting. And at least it’s honest and up-front. Not to mention, when you stop to think about it, a whole lot cheaper!

What are your thoughts on this? Are you asking your guests to pay for your wedding? We’d love to know. Drop us a line at hello@fabulousfunctionsuk.com or find us on social media.

2 thoughts on “Asking Guests To Pay To Attend Your Wedding”